The Motive (Available on DVD and Blu-Ray) 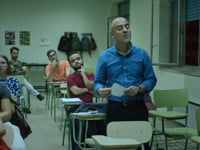 Álvaro wants to be a writer but everything he writes is false, pretentious and insipid. He works as a clerk for a notary public in Seville and his life is grey, coloured only by his dreams. His wife, Amanda, is his complete opposite. Always quite practical, she’s never dreamt of being a writer. And yet, she’s the one who writes a bestseller. Just one of life’s ironies.

Their separation is inevitable. And that is when Álvaro decides to go after his dream: to write a great novel. But he is incapable of it—he lacks both talent and imagination. Guided by Juan, his writing teacher, he explores the foundations of the novel, until one day he discovers that fiction is written with reality. Álvaro begins to manipulate his neighbours to create a story, a real story that is greater than fiction.